How I grew up, and why I'm not as proud of it as I used to be

So this is a difficult blog post to write.

I'll start from the beginning, because that's the best place to start.

Until the age of 6, I was brought up in a family house, with two of my older brothers and my parents. We lived in a fairly typical family home, surrounded by good neighbours.

My parents were part of a national sect called the Jesus Army, formed in collaboration with Oxbridge-educated minds and bikers/hippies who wanted a different way of life. It was a melting pot of different people of different sizes, backgrounds and mentalities. They practiced an Acts 2 Community lifestyle, sharing all their money, possessions and goods, and often living in big houses together, sharing meals and vehicles. The public facing gist was a Salvation Army style mission to reach out to the poor and needy is strong, helping everyone, helping people with drug and alcohol dependencies was common.

I went to a sect pre-school, the people who led it were big fans of hitting for misdemeanours. When I recently found a document from the early sect founding that centred on a particularly grim line:
"Children in Community are subject to their parents, and to the adults generally." That was addicts, ex-achoholics, "adults generally".

The move at aged 6 seemed like a no-brainer, looking back on it. We were to move to a Christian Community house in the same village, called New Creation Hall.
The details remained very much the same, no TV, no Christmas, no computer games, no takeaways, nothing that wasn't Christian. No competitive sport, limited mingling with the opposite sex, demons and their influence were very prevalent in the mind of this kid. You can see a 1991 governing document below: 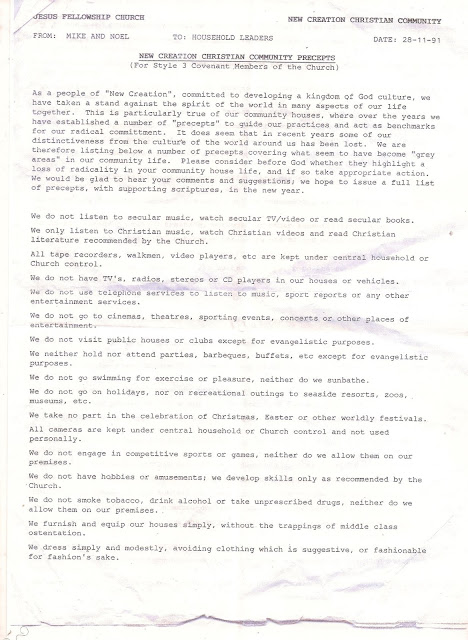 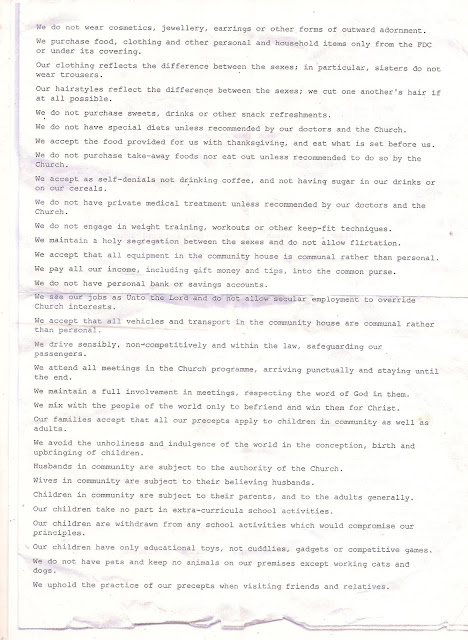 Looking back, that's the weirdest thing to me. There was a real siege mentality, the church was seen as 'Zion on a Hill', and it could do no wrong. Others could, but it was impermeable.

There were a lot of gropey hugs from old men, there were a lot of very chewed up people, and there was a lot of weirdness. In my dissertation I analysed a lot of Jesus Army doctrine, and found a lot of holes, and found a lot of exploitable doctrine, that could easily be corrupted with a will to do so. There was a very busy structure, meetings most nights. I noticed from very early, that people who questioned anything were labeled as 'of the devil', or chased out of the church.

This is not to say there was no good. A desire to help other people was so so strong within the community, I could go into any city in the UK and have a room to stay in and a hot dinner.

So we moved in, and that is where my life began to get a little weird.

There was a lot of shouting, and a lot of anger, I remember that distinctly. My possessions were transient, I remember coming home from a meeting one morning to find my ipod (saved up for over months) was gone, and the main suspect returning the next week with a smile on their face.

I started to work weekends and holidays for a business the sect owned, for which I was paid half of minimum wage, the leader of the house would keep the other half of my salary for rent (which my dad of course paid anyway, in full).

When I was about 12/13 my Dad announced he had a terminal illness, and Doctors thought he had two years to live. By this point, my two brothers who I had lived with since birth had moved out, 7 and 9 years older than me respectively so that was no surprise. But I remained, because I had to, remember - "Children in Community are subject to their parents, and to the adults generally."  and it got worse.

The relentless meetings were more strenuous than ever, people assailed me asking how my Dad was doing, and that my Dad's illness was all in 'the Lord's plan'. Home life was worse than ever, my Dad who I'd spend a lot of my interactive time with was asleep generally, on heavy medication, and very ill. We built cardboard castles, we watched silly cartoons on his laptop (banned under sect regulations of course).
But I read a lot more, I stayed away from the house a lot more. My Dad wasn't there to protect in the same way that he was before, I hated it. Some of the weirdness was more exposed to me in those months than it had ever been before. I reacted by removing myself more than ever from the church I had grown up in. Before this, I had been baptised, and said all the right things about believing in God. It was the right thing to do at the time. I wanted to not go to sixth form, and I wanted to work for a church business, in a building merchant's yard.

My Dad didn't die in the end. And he's made a full recovery. But I'll never forget hearing from some well-meaning people about how great God was to save my Dad's life, the story of Job was mentioned several times. Fuck them.

I left as soon as I could. I moved out at 16 into a different community house with some friends, that was silly. I had never felt more alone or disassociated, so I moved back. Eventually I escaped to Cardiff for University. The community life and constant hubbub of people was not present there, but it was my own space, and no-one had heard of the Jesus Army.

Over time I have changed and become more and more uncomfortable with the way I was brought up in Christian Community, and how I was interacted with by others.

Historic physical, mental and sexual abuse has been uncovered.

Lots of cases are in the pipeline.

It seems as though the status quo of the Church Community has been irrevocably damaged. And I am increasingly learning not to worry. I am increasingly learning to value the friends I had within the Community, and to value my parents, who have since left, and are learning how to live.  I always used to say that my upbringing taught me incredible empathy, the ability to not stress out over anything. I'm only now exploring the other side of that. I was exposed to things I never should have seen or had to understand as a child.
The Salvation Army style mission created a petri dish for abuse and mistreatment.
I didn't realise that till recently.

Another end of the upbringing that it introduced me to a toxic form of a vengeful angry God. It taught me to fall over when people put their hands on your head, or they’d push harder. It taught me that if something was wrong, it was demonic, which of course removes personal responsibility. I very much struggle to remove God from the mess I have seen, I very much struggle to depersonalise God from that.