6:30AM Circuits - "Efficient to Exemplary"


Before I get all of my pages of thoughts and notes onto (virtual) paper, it's important to note that this isn't a traditional blog, there was too much and information digested for it to be that, and that information was too varied for a blog to make any sense. So read on!
Enjoy my disjointed but connected thoughts from an insane week of learning.

So what was Summer School?

I was very kindly offered a bursary to attend a week away in Lampeter, for the Academi Wales Summer School, a week of learning, socialising, thinking, and challenging the status quo for the public sector, with a vast range of expertise and experience in the student body. At least that's what I took from the week.

I got a lift to Lampeter with someone high up in procurement in the health service, and someone in healthcare in Welsh Government. Any table you sat at could be next to a PhD or a Head of Service. That diversity and depth of experience leant itself to the week - The Great, the Good, and me.

Why Exemplary? Why not Efficient?

“We would rather be wrong than alone” – How often is the information there, the information is freely available, but nothing is done? That is wilful blindness. In overworked people, there can be a ‘make it go away’ approach. People want the alarm to stop, they want the problem to vanish, so they take the easiest approach to bring about that result.


Why am I talking about 'make it go away'? Well one of the problems of austerity has been cost-cutting leading to obedience. Things generally go wrong when people just follow the rules. The moral focus shifts at work, people stop wanting to be a good person, they start wanting to do a good job. These are fundamentally different things.

Efficiency is NOT your friend.
Efficiency means there is no buffer for when things go wrong. When tasks are simple, the process can be simple. The process of checking a bag into the airport is relatively simple, for example. It's done as quick and safely as it can be, there are relatively few checks, it’s a simple activity. But when you board the plane, there are four different engines, all run by different software, and the pilot has visibility over hundreds of pieces of information, of which they may only use a very low number of during any one flight.
Why is that?
Because when things go wrong there, it is crucial for passenger safety to be able to fix it, as quickly as possible, with exactly the right tools. When things go wrong there, there’s big problems.
In complexity, austerity doesn’t help, efficiency doesn’t help.
Public services are barely surviving, they focus on efficiency. What happens when something goes wrong? Something doesn’t work? There’s not been time for asset integrity checks and maintenance? Things go wrong.
(Jargon buster - Asset integrity means maintaining and mending before something breaks. Do you practice asset integrity on yourself? On the people who work with and for you?)
Now it's important to remember here that public services aren't always about being efficient.
Money-centric public services toe a very dangerous line, and that's because public value does not exist in economics. Innovation and value are understood to be external to public administration.
By its very nature, the public sector deals mostly in very complex problems, problems with a simple solution have been monetised, and put into the private sector.
But innovation lies at the heart of good public services. For example, innovation is political, it must be understood and harnessed.
Examine congestion in London - the congestion charge reduced the number of cars on the streets in London by roughly 20,000.
Uber then came to London, and suddenly there were 40,000 more cars on the streets.

In a business, you sense, you seize, and you transform.
Whereas in the public sector you are doing elements of that, but you are sensemaking - understanding the political fit and re-framing value creation, you are building legitimacy - forming alliances, hacking bureaucracy to make it work for you, and delivering - handling dwindling resources, teams, and metrics. 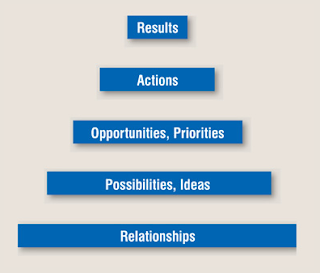 How do we manage? How do we lead?

The recurring themes of ancient and indigenous wisdoms about what made a good leader are:
Responsibility;
Trusteeship;
Benevolence;
Contribution to society;
Community;
Acting in the common good;
The leader as the teacher;
Reflection - thinking then acting, being context-focussed.

Why the focus on seemingly internal goals? Well "Culture eats strategy for breakfast", you can have the best strategic plan in the world. If the culture isn't right, and if you're not playing your part in setting that culture, you've got no chance.

The theme of stewardship permeates these goals, remembering the future, and seeing organisations as living organisms. "Holding the space" enables space for things to happen. The theme of the week was largely one of space, allowing sense-making time. The other theme was of a complex, constantly restricting world - which led us onto VUCA:


This state of reality for public services means that we can no longer 'predict and control', but we have to 'sense and respond'. Building in the opportunity to fail becomes essential - building in the space to learn from those mistakes equally so. And there doesn't need to be someone to blame!

You arrive at the premiere of a film two hours late, (stick with me here) you run into the romantic comedy you have missed the bulk of, and see the two lead actors sharing a kiss over a bottle of wine, the camera pans out to show the beautiful sunset, the lapping waves. The director is weeping and applauding, the actors are congratulating themselves.
The kiss means nothing to you, because you've watched none of the story, you don't care about the pay-off.
Your indifference is picked up on by an actor, who sits you down and talks you through the entire story, from start to finish, because you must care! The story is excellent! How can't you care!

That's what the public sector does with strategic plans.
We show people our strategic vision, maybe in a grand release, and expect them to be enthused, to buy into the story. When they aren't, we may explain the plan to them, which makes it even worse!

What happens when I'm stressed because things are going wrong?

Stress is a form of energy. “Anxiety is excitement without breath” – Noradrenaline reacts with the CO2 in the brain. We can affect our level of stress by deep breaths, associating the feeling of stress with four deep breaths, in and out. This works by increasing the amount of Noradrenaline in the body.

A female researcher stood in the middle of a rickety bridge hundreds of feet above a churning river in Vancouver and asked young men crossing the bridge to take part in her experiment. She asked them to write a short story in several minutes. She then gave them her contact details as a researcher would. She then carried out the same experiment on stable ground a little further down the river. About 70% more of the stories written on the rickety bridge involved sexual content, and many of the men writing on the rickety bridge contacted her asking for a date. Stress is a lot about how other people will react to you – and stress often has identical emotions to anger, arousal, and excitement, the context is all important – the physical symptoms are the same; dry mouth, fast heartbeat, churning stomach, sweaty hands.
Mentally shifting ‘Stressed’ to ‘Excited’. It has the same physical emotions, and as we see above, thinking differently brings about change.

Why are we overly stressed? Are we setting our goals too high? Or too low? 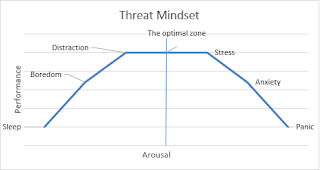 To the right side of the above optimal zone, the demands you have put on yourself are more than expected, hence the stress. The optimal zone is the goals sweet spot – too easy and too difficult goals defeat us. Successful people set moderate goals for themselves.

The body then releases Dopamine when you tick something off the to-do list. That is why, in a more ambiguous environment, writing ‘done’ lists is crucial – when you are doing those tasks that you are asked to do by others sporadically throughout the day, not tasks you are aware of until you are asked – the ‘done’ list then allows you to get the dopamine release that comes from mentally completing a task, as well as the physical completion of the task. This successful goal setting strategy can be supported by adopting shadow goals – a safe shadow goal is to stay out of the ‘Frazzle’ zone, this kicks in regardless of the main goal, and should involve self-care, having a shower, getting fresh air, eating something healthy, drinking water.

Talking about successful people, you see heroes, you see mental toughness, you see strong characters.
Is this a good trait?
Well it can be.

Why don't we talk about the negative aspects of mental toughness? We talk about Tiger Woods as a mentally tough athlete, yet are somehow surprised at the plight of over-toughness.

Tony Blair was supremely confident in 2001, winning a landslide re-election. The hubris of that confidence was shown in the Iraq war and the beginning of the fracturing of trust between the populace and politicians.

After all that, how can I be a good leader? A good manager?

Too often in leadership it is doing stuff, quickly, better, which has resulted in us becoming very good at ‘doing stuff’. Leadership is truly about someone giving you their power to act in exchange for hope. It’s about asking yourself if you have made that person feel stronger and more capable? Not happy. Happiness is temporary, and happiness often doesn’t give the desired outcome. For example, wanting to drive a car. It requires learning how to drive a car. If driving a car makes me happy, but learning to drive a car would not, if I was focussing on happiness as an outcome I would simply not learn to drive the car, so I could never (legally) achieve my goal.

Assorted other quotable nuggets which don't fit in the above narrative:
Posted by Joe at 11:31